The Institute for Governance Reform has released findings of a new report titled “Citizens Views and Voices on the Commissions of Inquiry” at a press briefing held at the Institute’s conference room on Monday, 11th February, 2019. 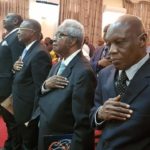 Executive Director of the Institute, Andrew Lavali said  between 6th and 8th February 2019, IGR canvassed opinions of 1,146 citizens in three cities, one swing area (Freetown), one opposition stronghold (Makeni), and one government-controlled city (Bo Town). At a margin of error of +/- 5%, a total of 383 randomly selected interviews were conducted in each city targeting an equal number of respondents across all wards in the cities. Officials in ten government agencies also served as key informants on the potential impact of the COI and GTT report as it relates to the behaviour of public institutions. The study also solicited respondent views on how the COI can be improved.

Head of the Anti Corruption Commission, Francis Ben Kaifala, who was present at the launching ceremony praised the report, noting that the findings would find meaningful expressions in the ACC’s growing focus of working to prevent corruption. He said some of the findings were very interesting but that he was concerned about the number of respondents who said they did not know how to engage with the Commissions of Inquiry in case they had vital pieces of information to share.

The report’s key findings are that 82% of respondents think the COI will contribute to the fight against corruption in Sierra Leone. While 74% of respondent believe the COIs will be fair, another 19% said they feared the COI could lead to violence. Read full report here: http://igrsl.org/wp-content/uploads/2019/02/IGR-Report-Commission-of-Inquiry-.pdf

This website uses cookies to improve your experience while you navigate through the website. Out of these, the cookies that are categorized as necessary are stored on your browser as they are essential for the working of basic functionalities of the website. We also use third-party cookies that help us analyze and understand how you use this website. These cookies will be stored in your browser only with your consent. You also have the option to opt-out of these cookies. But opting out of some of these cookies may affect your browsing experience.
Necessary Always Enabled
Necessary cookies are absolutely essential for the website to function properly. This category only includes cookies that ensures basic functionalities and security features of the website. These cookies do not store any personal information.
Non-necessary
Any cookies that may not be particularly necessary for the website to function and is used specifically to collect user personal data via analytics, ads, other embedded contents are termed as non-necessary cookies. It is mandatory to procure user consent prior to running these cookies on your website.
SAVE & ACCEPT